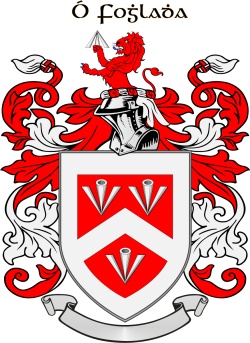 Design your own FOLEY Family Crest

Mac Searraigh- anglicised McSharry, Sharry, Sherry and by mis-translation as Foley, from searrach, 'a foal'.

The surname Ó Foghladha was originally of Co Waterford, but has spread through Munster and parts of Leinster. A 12th century Bishop of Cashel in Co Tipperary was Máel Íosa Ó Foghladha.

Mac Searraigh was a surname of counties Leitrim, Cavan and Sligo, and later of Donegal and Armagh.

Foley is also the name of an important family of Worcestershire; and although it is possible English officials or settlers of this name arrived in Ireland during the 17th century, the numerous Irish Foleys would be, by far, the majority. MacLysaght comments on this, and on the tendency to incorrectly ascribe to Irish Foleys the arms of the English family ('Irish Families', 1985).

If we look at the 1659 'Census', undertaken by Sir William Petty, we find Foley as a 'Principal Irish Name' in the following counties:

No Foleys found in the counties cited for MacSharry in the 1659 Census, in fact no MacSharrys either, only O Sharry appears in Co Armagh.

The Registrar General's 'Special Report on Surnames..' (1894) based on the births' distribution figures in 1890, found most Foleys in counties Kerry, Cork, Waterford and Dublin.

John Henry Foley (1818-1874) sculptor born in Dublin. His statue of Daniel O'Connell towers over the beginning of O'Connell Street, Dublin.

Linda Foley is an American journalist, and President of the Newspaper Guild from 1995 to 2008. She caused controversy by accusing the U.S. military of being responsible for the actual targeting of journalists in Iraq.

My grandmother was Carol Foley, daughter of Alfred James Foley. His parents were Micheal C. Foley and Mary (Minnie) Foley. They came to New York from County Kerry, Ireland. Would love to meet some relatives.

My Grandfathers Name was Truman foley looking for any info

Areas of Origin for FOLEY

Write an email address and click 'Invite' to share this page with more members of the FOLEY tribe.

Discover where the FOLEY Family members live around the world

Show off the FOLEY Family Crest…