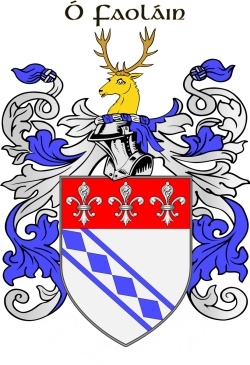 Design your own WHELAN Family Crest

The surname Whelan is one of the two most common anglicisations – the other being Phelan – of the Irish name Ó Faoláin, a diminutive of the Irish faol or fael, meaning ‘wolf.’

It was the name of the ruling dynasty of the Déisi, a population group inhabiting the area of the modern county of Waterford and County Kilkenny in the early medieval period (10th to the 11th century). They were defeated by the Anglo-Normans in the twelfth century and most of their territory was lost. Some managed to stay in Waterford while a branch of the sept moved north into SW Kilkenny.

The name ‘Phelan’ is usually seen in counties Waterford, Carlow and Kilkenny, while ‘Whelan’ is more generally used in Wexford and south Wicklow.

Peter Whelan (c 1802 - 1871) was a Wexford-born Catholic priest who distinguished himself as a chaplain for both Confederate troops and Union prisoners of war during the American Civil War.

Little is known about his early life but from 1822 to 1824 he attended Birchfield College in Kilkenny, where he received a classical and mathematical education. He continued his studies in America and was ordained for the new diocese of Charleston, South Carolina in 1830.

During the American Civil War, Fr Whelan volunteered to serve Confederate troops defending Fort Pulaski near Savannah. Along with the troops he became a prisoner of war when the fort surrendered in April 1862 and was transported to Governor's Island in New York. On May 10, 1862, Fr Whelan was discharged on parole, but he refused to leave, choosing instead to remain with the prisoners.

Two years later he travelled to the open air prisoner of war camp at Andersonville to minister to the 33,000 sick and dying Union prisoners there. In the appalling unsanitary conditions in the camp, he contracted a lung ailment that would shorten his life. After the war he returned to Savannah as pastor of the new St Patrick's church.

Known as 'The Angel of Andersonville Prison', his funeral in 1871 was the biggest Savannah had ever witnessed, with thousands of people in attendance.

Peter Whelan (1831-1900): Nephew of Fr Peter Whelan (q.v.) and second son of James Whelan and Mary Larkin who from 1833 resided in the RC parish of Ballycullane. In 1849 Peter emigrated to the US and stayed with his uncle in Locust Grove, Georgia, working as a farmer. About 1852 he migrated south to Leake County, Mississippi where he established a farm and got married. When the Civil War broke out, he joined the Confederate army but was badly wounded at the Battle of Gettysburg and was eventually allowed to return to his life in Mississippi. His wife, Martha Elizabeth Thompson died in 1869 leaving him with five young children. He remarried c 1871 to Sarah Henriette Brook and had at least five more children.

In 1884, after Peter’s parents died in Wexford, his sister Anastatia arrived from Ireland. Peter died in 1900 and Anastatia in 1905. They are buried in Saint Mary of the Springs Catholic Cemetery, Madison County, Mississippi.

Kevin Whelan. A native of Clonegal on the Wexford-Carlow border, Dr Whelan is best known as an engaging historian and one of County Wexford’s most eminent and productive writers. He is a former Newman Scholar at University College Dublin, and Bicentennial Research Fellow at the Royal Irish Academy.

Between 1995 and 1998 he was historical advisor to the Irish government on the Famine and the 1798 rebellion. In 1998 he was named the inaugural Michael Smurfit Director of the Notre Dame Dublin Global Gateway. 1998. Dr Whelan has written or edited over twenty books and over one hundred articles on Ireland’s history, geography and culture and is considered one of the leading historical researchers and writers of his generation.

Gerard Whelan was born in Enniscorthy, County Wexford, and has lived and worked in several European countries. He is the author of many books for children and a multiple award-winner. His first novel, The Guns of Easter, won the Eilís Dillon Memorial Award for first-time writers. Dream Invader later won the Bisto Book of the Year Award. He has also been shortlisted for the Reading Association of Ireland awards. Gerard is also the author of A Winter of Spies and Out of Nowhere.

Noel Whelan (1968–2019) Born in Ballycullane, Co Wexford, he was one of a family of 12 children. His father Seamus was a Fianna Fáil county councillor.

Whelan was a barrister, writer and political pundit, with Masters degrees in History and Politics, and in International Relations.

In 2011, he joined the board of the JFK Trust in New Ross and in 2013 he was elected as its chairman. In conjunction with the JFK Trust, he established the Kennedy Summer School with fellow directors Sean Reidy and William Keilthy.

Whelan was well-known for his Irish Times columns and featured regularly as a commentator on radio and television. He also played a leading public role in a number of national referendum campaigns, including the campaign to retain Seanad Éireann (2013), the campaign for marriage equality (2015), and to Repeal the Eighth Amendment (2018).

I am trying to find out information on Alice Whelan born either 1924/1926. Her family was from Dublin and when her parents died Alice and her siblings had to move to Stradbally to live with their relatives. Alice worked as a domestic servant in Stradbally she fell pregnant with me but refused to marry my father. His name i think was David Byrne and he lived in the village pf Timahoe about 1mile from Stradbally. Alice left and came to England where she had me. I was later adopted. Any info on Alice or my Father and his family....2 daughters and 1 son would be most helpful. I wish to add that I have great respect for my birth parents. Thankyou

Hi, wondering if anybody out there can translate the Whelan motto shown on the shield, as my son would love to know, any help would be much appreciated, thanks from us in Oz

I am trying to find out my family history and which crest is actually my familys whelan crestcoat of arms... when my family lived in the Dakotas some time ago, their house was burnt down and the family historydocuments and anything showing our history was pretty much lost... We live in california now and my great great grandfather is Cleophus j. Dowd, the priest who was known as Utahs most enigmatic outlawlawman and had trained butch Cassidy and the Sun-Dance Kid, and i can only hope that this somehow helps in my goal to find out my family history and crests...

Areas of Origin for WHELAN

Write an email address and click 'Invite' to share this page with more members of the WHELAN tribe.

Discover where the WHELAN Family members live around the world

Show off the WHELAN Family Crest…